Flozzy and I went to NOLA – New Orleans, Louisiana – for nearly a week.

Everyone said ‘that’s a long time to go for’, but we genuinely didn’t want to come back.

We stayed in a hostel just off of St Charles Avenue called Auberge Nouvelle Orleans / AubergeNOLA, which I would highly recommend. It was my first experience staying in a hostel and since we were in a 10 man dorm I was slightly concerned, but actually it was completely fine.

The staff were lovely, the other people staying in the hostel (complete mixed bag you did not know who was coming through that door) all were polite and occasionally talkative. The bathrooms were clean, as were the bedrooms and we were even provided with breakfast.

Exhausted from our 2 1/2 hour flight with Spirit, the most hilarious airline I have ever flown with as the entire cabin crew are so sassy, we headed towards the hostel. Everyone who mentions Spirit always have one of those scrunched up faces of disgust as if it was a bad smell, but actually Flo and I were perfectly comfortable.

Spirit: “Ladies and Gentlemen we are about to land, can you, your friends, your children, your family, CAN EVERYONE GO TO THE BATHROOM as we are about to put the seat belt signs on”

We were too early for check-in so we ditched our shared suitcase at the hostel and walked towards the French Quarter. The French Quarter is the oldest area of New Orleans, but also the party area and we decided to go exploring.

Little did we know, we would stumble upon an original Banksy that had been protected with some thick clear plastic – very cool.

We ended up in Cafe Beignet listening to Jazz and eating Muffaletta’s (I’ll discuss the food in another blog post). We then sauntered into a beautiful bar , Pat O’Briens , and sat in their stunning courtyard looking at the fountain, until Josie arrived.

Honestly the rudest waitress I have ever come across, I don’t get angry easily but she had me physically shaking.

While throwing napkins on our table – ‘You want a drink?’

Well, yes Josie, that is usually why people come to bars….

After our first round of drinks, Josie decided we no longer existed. She walked passed us SEVERAL times, and decided everyone around us was allowed to order drinks. As time passed by, and by time I mean about half an hour/ forty five minutes, of watching Josie serve everyone but ourselves we said ‘excuse me’ to get her attention. Innocently thinking, maybe she just doesn’t see us.  She continued to ignore us.

Two tables sat down around us and Josie decided they should be allowed to order drinks. so we sat there thinking – she will definitely come to us next.

So I decided to head to the bar where she was and asked:

“Hello, can we order another round please?”

Josie – “I’m busy” Now, an innocent remark usually, but this was filled with so much hate I didn’t really know what to do with myself.

Shocked, I turned around to the man next to me and he looked at me with pity in his eyes and asked what we would like. This was when I tried my first Hurricane – an absolutely vile drink that is pure grenadine, however very strong and hit me like a brick wall.

Apart from Josie, it was a lovely bar and it was very amusing people watching, especially after large groups had more than one Hurricane.

We left wondering – how can this stranger HATE us so much?!?! Classic Josie.

We sauntered along to Cafe Du Monde, notoriously known for having horrifically long queues and we got a table straight away. It’s cash only and Beignets are only $3 – little pouches of deep fried goodness covered in icing sugar. Flo doesn’t like sugar, but she sure loves Beignets.

We then headed back to the hostel to (finally) check in and they told us they were having pre drinks at 8. So we got ready and joined them. 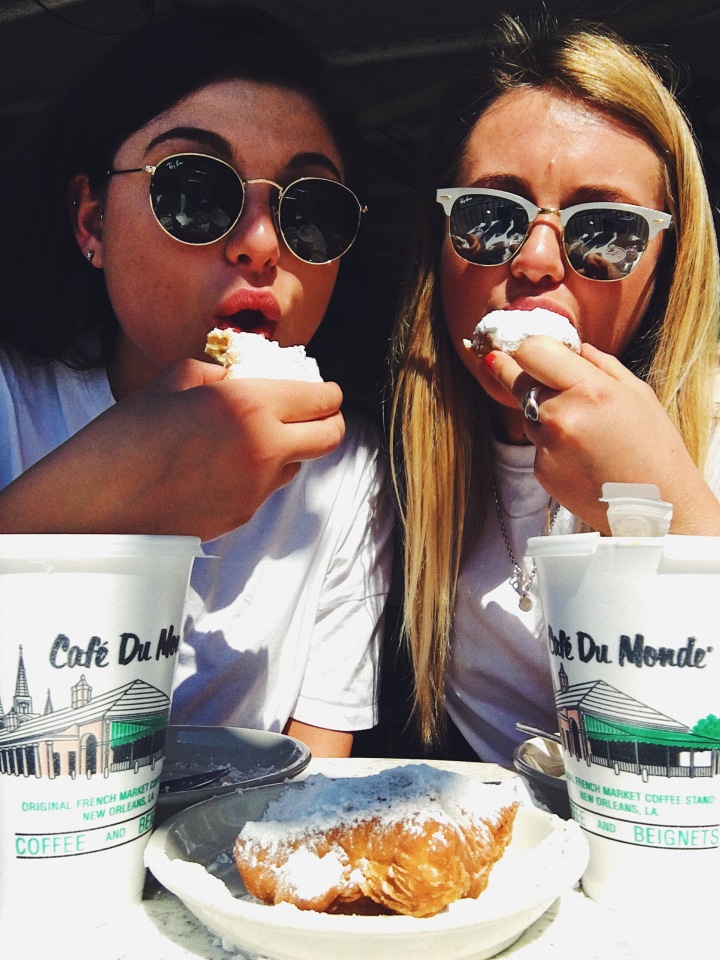 “Canada on the other hand was on another level”

Side note: I’m not going to name other hostel members names, purely because I can’t remember them and for privacy reasons so I will go by descriptions.

Australia, Canada and Germany were all sitting out in the beautiful courtyard waiting for everyone and we joined them for a few drinks. We were then joined by Denmark, London, Mr South, Facebook, Russia, Washington, Wolverine and then London 1 and London 2 arrived.

I cannot tell you how far we walked to the first bar, this was not a bar crawl this was a bar mission. It was very obvious by the first bar that the hostel had been told/ these bars pay for the hostel to take us to them because they were not great and the majority were empty.

There was about 6 bars and Australia and Germany felt the need to tell us to go to the next bar when we had JUST ordered drinks EVERY TIME. Canada on the other hand was on another level, and by on another level I mean giggling her tits off and was clearly enjoying the affects of something that was not alcohol.

Russia was one of the most odd and interesting people I have ever met, Flo and I couldn’t help but be bewildered by her chat. From her giggling at what we said (which wasn’t funny), to her cracking jokes in broken English to telling us it was her dream to buy a car and drive around the English countryside – she was a lot of entertainment.

ONE bar was good, because we played darts. I shot a bulls eye first go and my teammate, Facebook, took everything a little bit too seriously, however Flo and London 1 nailed it with the win.

Then Flo and I decided to run away and go home because we had both crashed from exhaustion,  we realized the bar crawl had taken us FURTHER AND FURTHER AWAY FROM THE HOSTEL. Which to me, makes zero sense surely you work your way back home?

Anyway we jumped in an Uber and passed out. 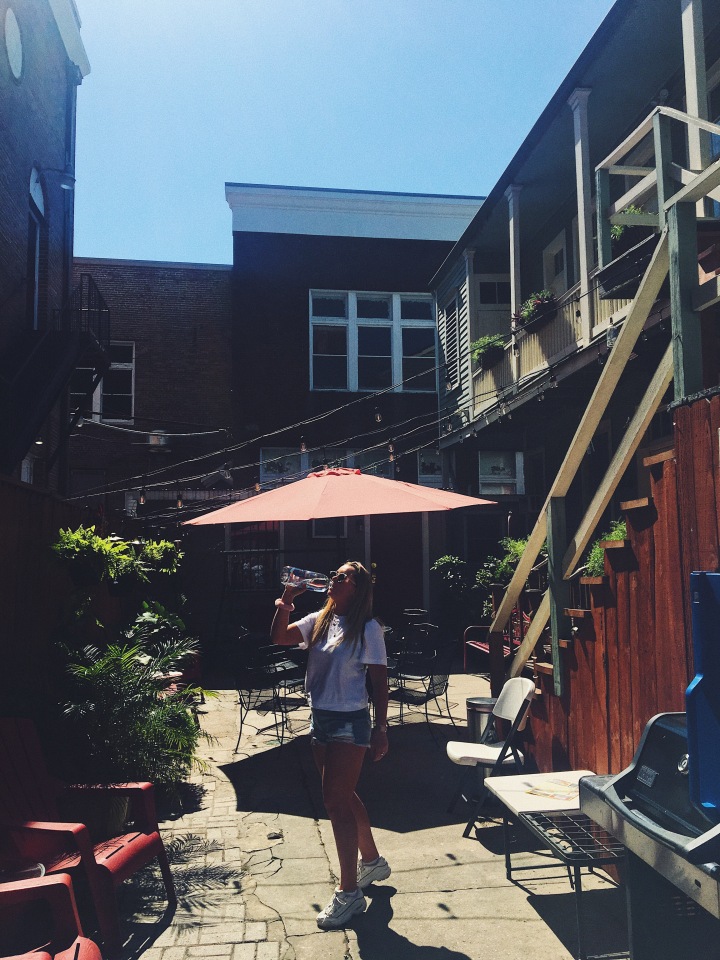 2 thoughts on “The NOLA Diaries- Day One -Banksy, the rude waitress and a bar crawl.”