Located on Piccardy Place is a meat lovers heaven. I’m not one for a Sunday Roast, but on this occasion I made an exception as a friend of mine who does the PR for Steak invited me along to try it out.

The vodka soaked floors and the ‘shisha garden’ of my old haunt, Mansion,  no longer exist, and they have been replaced with the modern interior and exterior of Beer and Skittles and the elegant interior of Steak. There is also Steak on Stones, but I did not manage to experience this third of the Steak trio.

We decided to head to Beer and Skittles first as we were early, the sun was shining and we wanted to sit outside with a lovely bottle of prosecco.  Beer and Skittles is the teenager of the Steak family due to its relaxed nature, video games and  very cool outside area. It was the perfect place for a pre-dinner drink as the weather was lovely and it had a very chilled atmosphere.

When it was time to eat we headed up the stairs to Steak, the posh and elegant mum of the three restaurants. It has a dark and sharp interior with candles here, there and everywhere.

We were greeted by Fabio a very pleasant waiter who was always happy to explain something to us and had a lot of knowledge of the food. *Shout out to Fabio*

We had the Steak Sundays, which is 200g roast leg of lamb and 400g cote de boeuf with duck fat potatoes, roasted root vegetables, creamed peas with leeks and bacon, a Yorkshire pudding and gravy.

It is your choice as to how the meat is cooked, so we asked to have the lamb well done and the cut of beef medium.

I have to say, this is the first time I have EVER had my meat cooked for me EXACTLY how I wanted it. What impressed me even more was that it was two different cuts of meat that they managed to cook perfectly, I was gobsmacked because I am usually disappointed. 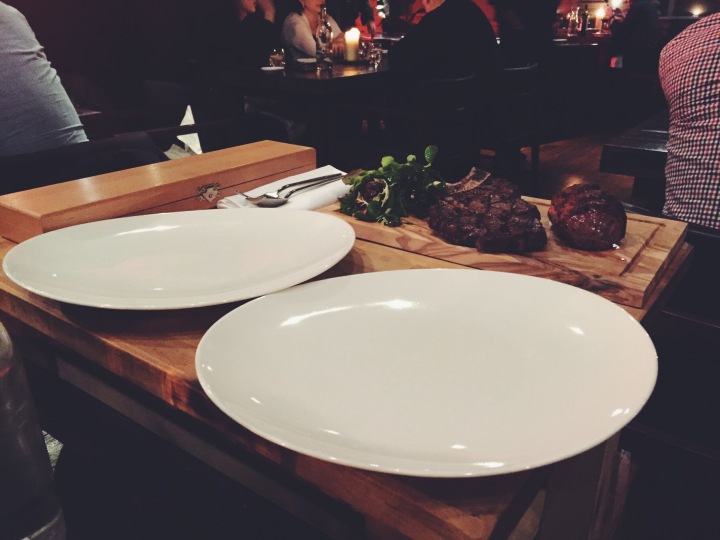 It was a lovely experience for both of us as the meat is cut at the table for you, which neither of us expected, it really added that little bit of special on to the meal.

Fabio was a perfectionist when it came to placing it on the plate, he even asked if we were okay just cutting the lamb in half or if we would like it in slices. Seeing as we were ravenous by this point watching him slice the beef we didn’t care how the lamb was sliced as long as it made its way on to the plate. 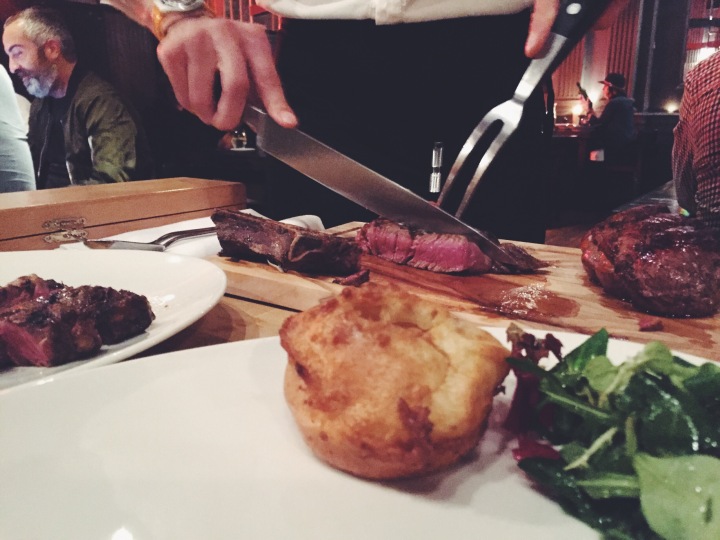 Emma’s favourite meat was the beef, but mine was the lamb. I am not one to order lamb but this was glorious, the flavour was insane I have no idea how to describe it and I will now re-think when it comes to ordering it.

This doesn’t mean that the beef was not good, it was also incredible. On a scale of 1-10 the lamb was a 9 and the beef was an 8.5 so it was a very close call.

It’s making me sad that I am no longer eating them.

As mentioned before the Sunday roast also comes with  duck fat potatoes, roasted root vegetables, creamed peas with leeks and bacon, a Yorkshire pudding and gravy.

The Yorkshire pudding was unusual, sweet and delightful and the gravy was incredible and rich.

I have to say the peas were to die for I honestly could not get enough of them, they were a tasty festivity of flavours.

Here is what I thought in order (so I don’t harp on too much):

Overall the food was incredible, there is a little wait but it is totally worth it, however the one thing I would say is that it is most definitely not cheap. We both agreed that although the meal was incredible it would  be seen as a pretty special night out rather than a Sunday roast because of the price (£60 for two).

Recommend: a lovely meal for two, whether it is catching up with a friend, family,an anniversary or treating someone special.