I apologise that this isn’t a review of a restaurant or a video of a recipe, the festive period has been a busy one for me working/ socialising. So this is a little round up of everything that has been going on!

One word about the restaurant : Horrific

A couple reasons why:

However it was still a fantastic night and everyone thoroughly enjoyed themselves! (After a few too many glasses of wine)

Well, first things first… We have to talk about the German Sausages. EVERYONE at work loves them, we specifically like the stand that is next to the National Gallery with the random shouting moose attached to it. Once someone brings one in for their lunch, everyone smells it or sees it and then everyone ends up getting one for lunch. They are super delicious though.

Now let’s talk about Mimi’s bake house hut… YUMMY. I had the Nutella Hot chocolate (there were a million choices) and a Peanut Butter Nutella Blondie. (There’s a theme here)

For lunch one day I decided to see what I could get for £5, and I tell you what there was not much choice. The majority of things were over £5 unless you wanted a side dish, but I managed to find Roadrunnerz street food, which was next to the Udderbelly events tent/venue. I ordered the vegetarian option, which was a kind of casserole with a ton of veg and mash. It was really good, hearty and filling, but needed some seasoning. I had a wee chat with the man running it, and he interestingly said the Edinburgh Christmas event didn’t focus on local businesses, which is something worth looking into. 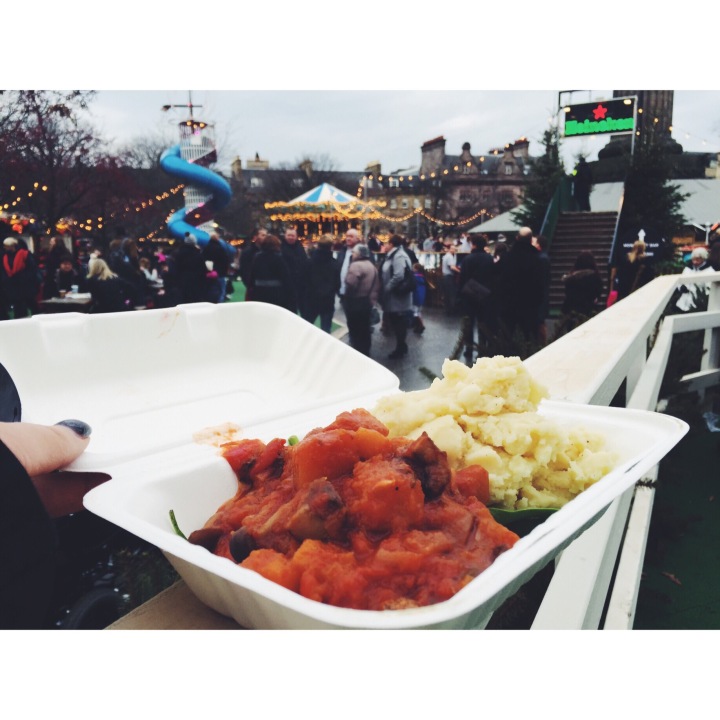 My mum and I decided to go for Baileys hot chocolates above the ice rink, these went down way too fast and were delicious. We also decided to go on the big wheel afterwards … And both of us felt quite ill being on it…. I remember it being a fun experience when I was younger…

We then joined Lewis and decided to go to the carousel bar, which is great fun as it spins round (slowly) while you have a wee drink (I had mulled cider – fab), every time you turned around you were facing a different direction. The only ridiculous part was having to put a deposit down for a plastic pint glass?!? I understand the Christmas mugs… But c’moooon!!

We then went to see an amazing performance called Beyond by C!rca, this was in the Udderbelly tent/venue. It was beautiful strong women, carrying these equally beautiful and strong men around, with a lot of acrobatics. The muscles in every single one of them were incredible. It made you feel very bad holding the beer in your hand while watching them.

I attempted to film this…I honestly did. My camera ran out of battery while filming a couple of crucial (unrepeatable) bits, and my tripod decided to fall apart half way through as well (have ordered a new one). So filming this was not meant to be. Funnily enough a few things went wrong while making it, the mascarpone cream/ sabayon layer totally failed on me and curdled and looked revolting, I decided to just replace this with cream and mascarpone. ( A lot simpler) I also ran out of time to make marshmallows. BUT ILL JUST HAVE TO GET OVER IT. (the food perfectionist in me is crying inside)

The layers of the chocolate trifle were :

I have to say as much as it went wrong, it was delicious, and people kept going up for seconds. *Sigh of relief*

The recipe was from the latest festive issue of Jamie Oliver’s magazine, it is on page 93. I have tried to find a link to the recipe however there doesn’t seem to be one, I’m sure there will be one in the future.

Similar concept to my previous dinner party were everyone provided food. SO MUCH EFFORT WAS MADE. It was all DELICIOUS as well. As I was working all week I couldn’t provide anything home-made, so I will hang my head in shame at my shop-bought effort. 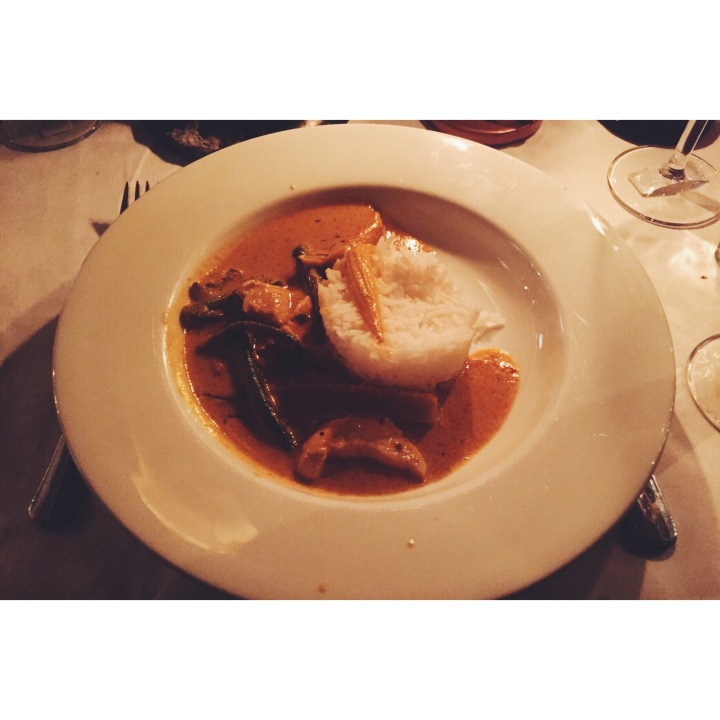 There were some awesome Pina-Coladas in actual pineapples too. 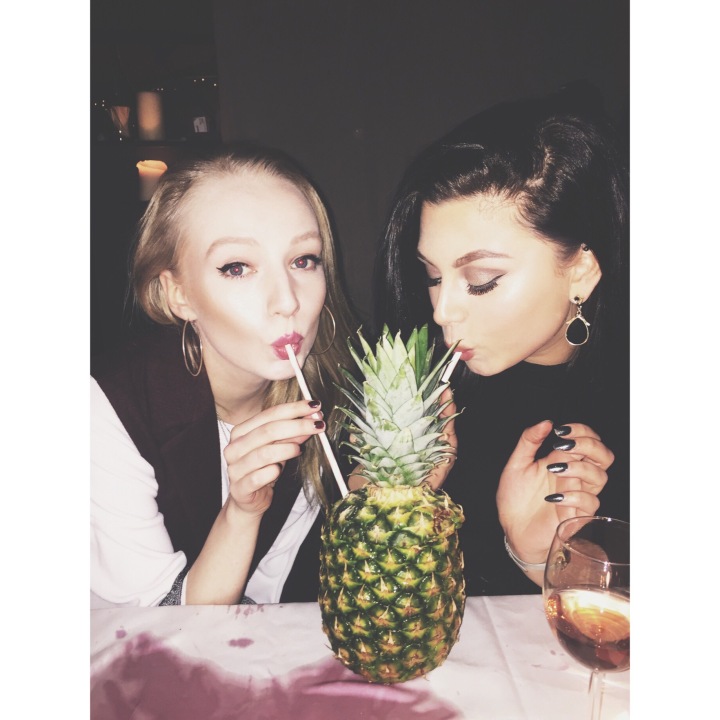 MASSIVE SHOUT OUT, to my lovely friend Alice. Alice never fails to make an incredible dessert. Previously she has made a beautiful Yule log and Mojito cupcakes, on this occasion she made Chocolate Orange cupcakes, with the most beautiful icing including clocks striking 12, 2016, and little champagne bottles. They tasted exactly like a chocolate orange, and I was all over them. 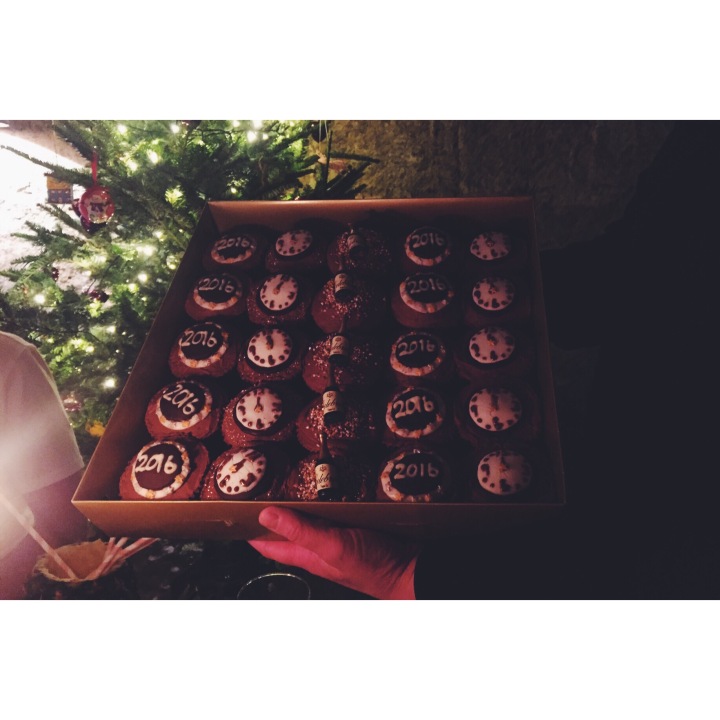 It has been an eventful December to say the least, I would like to thank everyone who reads my blog and watches my videos, I have been having a lot of fun posting more regularly!

If you have any suggestions of recipes I should try or restaurants I should visit, please let me know!

Hope you had an amazing Christmas and New Year, and that 2016 treats you well!